Because you didn’t ask for it. 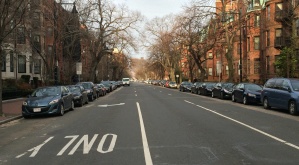 The other night, a couple of (brave, he adds redundantly) firefighters died three blocks away from me.

i weaved an unorthodox route home, conscious of traffic backed up from unexpected detours at rush hour.  i parked recklessly, knowing that i maybe wouldn’t get a chance to circle through the area where fire still burned, as i typically do.  i walked calmly across deserted, blocked, streets, unsurprised to see emergency vehicles form a galaxy of flashing lights.

After all, this happened a block away, albeit without the tragic results, a couple months ago.  Or the annual big snowstorm that feels as if the apocalypse bears down on us.  Or the Marathon bombings, when i biked down streets that were empty except for ambulances blasting the other way.  Or the sleepless night a few days later where the madmen toured everyone’s neighborhood before taking up residence in Watertown.

Point is, all this feels normal now.  It’s not surprising.  It’s not any less horrible, nor any less personal when it is your city, your neighborhood, your fellow citizens, but why do we feel so used to it?

Too much news?  A generation grown up watching Armageddon and Independence Day?

It’s not as if a fire, even a big one, compares with a bombing, or with, say, the landslide in Seattle, right now.  All the same, i can’t help but wonder why this all feels so routine and worry about what that means.

This month, the girl and i are embarking on what we’ve termed the “Month of Power”.  Similar to the increasingly popular ‘Sober January’, but without the sobriety, necessarily.  It’s focused on penance for a truly excessive month of December, but if i’m honest with myself, i’ve eaten even more badly than my already reprehensible standard for a solid two years now.  Therefore, a month of corrective measures.  Plenty of exercise (this isn’t the least bit unusual for me, of course) including the dreaded Kelsey and her brutal boot camps on Thursdays.  And also a 2,000 calorie a day (or fewer) diet.  For a guy my size, this results in losing weight.

What’s interesting about this, is that every time i undertake to lose weight, i flirt with tendencies that remain from when i was 17 and dangerously anorexic (trust me on this one, if you’re not related to me or one of the few close friends who’s seen pictures).  Sticking to things that have printed numbers of calories on the side.  Adding them up obsessively.  When i’m forced to eat something that someone, say, cooks, leaving 1,000 worth of room for something that winds up being half that.  And suddenly the 2,000 is 1,500.  And all this is fueled by feeling better, looking better, nothing but positive reinforcement for a while.

But eventually it’s unhealthy.  Not just ’cause it’s all Hot Pockets and ramen and diet Mountain Dew (and beer, beer i’ve left room for).  Mostly because it’s an insufficient amount of nutrition.  Instead of flying down the soccer field and finding push-ups easier, i’m winded after five minutes and weak as a kitten.

So it’s best to have an end in sight.  And damn am i ever looking forward to that end.  And pizza.  And cheezburgers.  And burritos.  And that’s how i know i’m okay.

To be honest, i think i need to change it up this year.  Maybe learn some different things about myself instead.  The last thing i want to do is get bored with my spreadsheet, after all.  Although i was very proud of my scholarly work studying the types of beer i drink, that took a lot of work, so i will not be doing that again.

What does this tell me about the forthcoming year?  What did i not do enough of?  Too much of?  Well, i didn’t play enough video games or go to enough concerts, because there weren’t any to count (although ironically, i did close down more bars than i did last year).  i’ll certainly hope to commute by car less this year, and road-trip more to make up for it.  i feel like i’ve let my twitter performance slack a little bit, probably due to working too much, and i barely kept my elite status on yelp; both need to improve, although i did take a lot of photos this year, which is nice.  And as always, this year, i’d like to score a goal, dammit.

Without goals, all this data is just self-indulgent wanking, you know.

Read on, and be very afraid, friends.

It’s hard to explain sometimes, why i like to keep track of mundane details like what populates this festival of trivialities.  i suppose it’s best summed up by the idea that from thirty seconds of thinking about what i did each day springs a vivid picture of the rhythm of an entire year.  Things i did well, things i did a lot of, things that, in retrospect, i wish i did more of, or less of.  And of course, how many times i went to McDonald’s.

As always, i mostly do this for my own amusement, but also to serve as an inspiration.  Or warning.  To myself and others.

Before i left for Paris and Amsterdam in September, i quit my job. No need to belabor why here, other than to say i just wasn’t happy with the work. Since then, i’ve been either traveling or slacking off, with a couple of interviews and a week or so of finishing up some grueling contract work.

Needless to say, i’ve been granted a lot of time to spend with my thoughts, so it’s fortunate that i’ve been able to do such a good job of drowning them out by building Legos, watching Champions League games (at home! during the day!), and playing a lot of Fieldrunners 2 and FIFA 13. But all this doesn’t add up to much, merely ways of passing the day until i can hang out with people in the evenings, or go play soccer. It’s all desperately uncreative, in the sense that i have nothing to show for most of my days.  The Legos will be taken apart at some point, and Xbox achievements do not count.

By the same token, i’m resolved not to jump back into work that maybe isn’t a great fit, so for now, the plan is to line up contract work that lets me do interesting things, and then bugger off and go interesting places. It’s not even that i need the money—i didn’t undertake this plan without having a cushion built up that will last many months longer.  In theory.

Despite that, though, it’s been an interesting opportunity to think about my relationship to money, in that no matter how cavalier i am about it (and rest assured, i am), there is still that bit of nervousness when the spigot that fills up your finances is gently turned off. There’s a tendency to want to put your foot over the drain, to have it flow out more slowly, more deliberately. My attitude changes from day to day; some days i feel fine about it and go out and drink with my customary abandon, some days i feel like eating ramen with the blinds drawn.

And it’s interesting to think about money in the sense of a flow, particularly to recognize how many things we interact with on a daily basis are founded on the principle of having everyone be spending money, directly or indirectly in some way for as much of the day as is possible. Subscriptions for this, a fare for that, a fee here, and a bill there. You wake up and you’re not only using things, ideally, you’re using things up. It’s not in my nature to curtail this lifestyle. In the same way i eat an appalling diet and offset it by being highly active, i’m far more comfortable being a hardworking spendthrift.

Still, just the other day, i was thinking about how the act of buying a thing (or at least appearing like you could) lets you into the club, admits you to the civilization of niceness. Buy a cheeseburger, use our bathroom. Gawk at a computer in a warm, modern store.  $6 for a beer gets you a nice place to sit. $9 a month lets you compare yourself to the downtrodden Michael Keaton and watch Mr. Mom whenever you want.  It’s informative then, when faced with those as identified expenses, items to consider the value of instead of ‘oh, whatever’, to gain some perspective and realize that i’m lucky to have whatever option this is that i’ve chosen, and that nothing going on right now constitutes a problem.

After all, i’m writing this from the Charles River boat docks watching the sun set while you’re still at work.